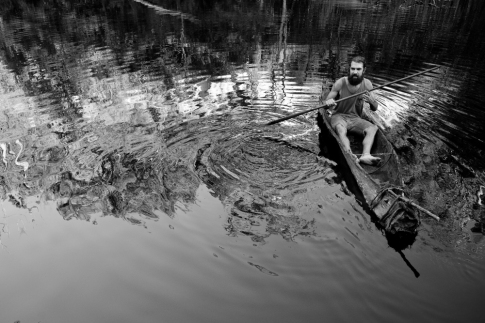 Back in February I announced on this blog a project called Boorun’s Canoe, an Indigenous cultural arts collaboration I’ve been working on part-time for the past couple of years with Indigenous artist Steaphan Paton, senior Gunai/Kurnai elder Uncle Albert Mullett, the extended Mullett family (of the Gunai/Kurnai community in Gippsland) and Bunjilaka, the Aboriginal Cultural Centre at the Melbourne Museum.

“Boorun’s Canoe is a story of cultural pride and intergenerational knowledge passed on by Senior Gunai/Kurnai Elder Uncle Albert Mullett to his Grandsons and family, including lead artist Steaphan Paton, who learnt the tradition of bark canoe making. Featuring the bark canoe and stunning photographs by Cam Cope capturing the canoe’s creation, Boorun’s Canoe celebrates the strength and continuation of Victorian Koorie culture.”

Steaphan and I are now really excited to be able to announce that the exhibition will be opening in just 3 weeks time and will be open to the public for four months! (July 6 – November 4 @ Melbourne Museum, Nicholson Street, Carlton). The exhibition will showcase the canoe that the Mullett family made, 15 massive prints of photographs I’ve taken (1.6 metres in size!) and a short film made by Daybreak Films on the day we launched the canoe at Lake Tyers in February. The space that Bunjilaka have offered us is absolutely amazing and will do great justice to  what has been the most interesting project I’ve worked on.

I hope you can get get down there to check it out and if you’d like to attend the opening night launch event on Thursday 5th of July send me an email and I can send you an invitation (the event is by invitation only).